Happy Friday! Hi guys, how was your week? Mine was the best one in awhile, and today was really great. At school, we didn’t do much of anything for the rest of the day after lunch, so it was a relaxing afternoon.

Good thing it’s Friday too, because last night we went to see Mockingjay (!) at 8:15, and we didn’t get home until around 11. I was really tired this morning (oops) but the movie was pretty good… Different than the book if you read it… different enough that I was in the theater thinking, “This is all wrong. It’s just wrong,” but hey. It’s just that someone was there that wasn’t supposed to be, because you’re not supposed to know what happened to that person, and the film started different than the book, and well you know. Other than that, everything was pretty much the same. It also got a bit violent at times, but it wasn’t too bad.

My favorite thing about the movie though was the costumes. Katniss’ official Mockingjay outfit is just wow. And the sketches from Cinna are beautiful. I would wear any of those in a heartbeat. Speaking of outfits… I have a Katniss Arena Coat from the first time she was in the Games from my Halloween costume a few years ago, and I thought it was the perfect opportunity to wear it again. I put on some dark leggings, a white shirt, combat boots, and my coat (plus my Mockingjay pin), and I braided my hair for the movie. I felt very in spirit… but really I just wanted to wear the jacket again. 😉

Now back on-topic: Weekend. What are you doing this weekend? I am having family come from out of town to visit tomorrow because I have a symphony concert on Sunday! Our dress rehearsal is tomorrow, and our concert is the day after, so there’s not much time until the end of the 2014 season. I’m looking forward to it, because we started back in September, so it’ll be nice to see everything pay off + then have a break until January. Then next weekend is Thanksgiving, so school break starts on Tuesday! Yay! Anybody else?

I’ll talk to you tomorrow – Let the weekend begin! 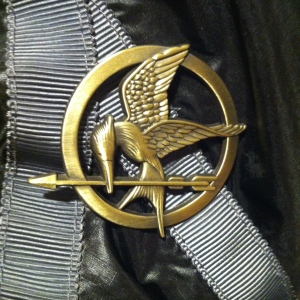